Share All sharing options for: The Penguins Golden Boy Showered In... Praise?

I made mention of them the other day, but have now received an email from a gentleman claiming to be the evil genius behind Monday night's, um... pamphleteering:

As of about three years ago I began paying tribute to the Penguins by offering fans of both teams the ability to urinate on a "star". This year happened to be Sid with a small caption to entice those willing participants to aim more precisely.

I successfully placed these little pee-pics [pictured] in all the urinals at Verizon Center this past Monday night.

FYI, the "small caption" read "I'm Thirsty," and by "all the urinals," he means all the urinals, from the 100's to the 400's. As someone on the Caps message board noted, this would be a 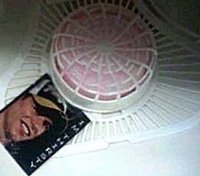 great new Versus ad - "Honey, what's Sidney Crosby doing in the urinal?" "Oh, he's just here to remind us that there's a game on Versus."

The "pee-pics" are fast on their way to becoming legend, thanks to tales like this one:

A Pens fan was in one of the upper level restrooms with a plastic bag from the concessions over his hand trying to pick them out of the urinal and still couldn't (while the Caps fans stood back and laughed at him).

Great story, but we all know that a real Pens fan - like this guy - wouldn't have needed the plastic bag.