It's somewhat fitting that on the day before we go to the polls to vote, your nation's Capitals are visited by their counterparts from the north. The Sens come in having played inconsistently to date and look like a team still trying to find its identity - the skill has never been in doubt, but the heart continues to be very much in question, especially from a couple of those more-skilled players. We'll see which Ottawa team shows up at the VC on Monday night.

I'll have more of a preview later. Or I won't.

Caps/Sens Flashback of the Day:

Earlier Saturday morning, Chretien and Clinton took time for the Canadian leader to make good on a bet over who would win the Washington Capitals vs. Ottawa Senators National Hockey League playoff series.

The morning after the Capitals eliminated the Senators from the series, Clinton presented Chretien with a Capitals' jersey. Chretien put it on for reporters -- a condition of the bet -- and joked in French it was embarrassing to don the jersey of the American team.

Clinton accepted a Senators' jersey from Chretien, and the two leaders exchanged hockey sticks autographed by their respective teams. 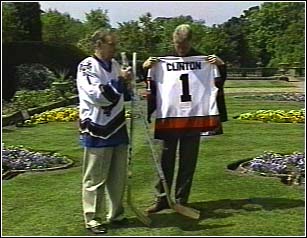 I don't know which I miss more - Clinton in the White House or the Caps winning a playoff series.