Roberto Luongo and Jon Sim are no longer in Florida, so you knew the Caps had a chance last night against a team against whom they were 0-7-1 last year. And any time your team plays against Todd Bertuzzi's and no one needs to be stretchered off the ice, it's already a good game. Anything after that is really just icing on the cake, and last night the Caps had plenty of icing courtesy of Semin (wow, that didn't sound good). The Caps scored early and often, tallying five times before the game was fifteen minutes old, and sending Alex Auldful to the showers after just 12:36 of action en route to an easy victory.

I must say, however, that other than those first fifteen minutes, the game kinda sucked. I realize that that's like saying, "Other than John Lennon, the Beatles kinda blew." But my problem with the way the rest of the game played out (and it is very much worth noting that Olie Kolzig was in Vezina-form for all 60 minutes) is that the Caps don't have that killer instinct yet. In fairness, the team has rarely been in position to put opponents away, but a night after watching the Sabres' unrelenting attack against the Flyers, I was hoping to see the Caps do similarly. Instead, they only mustered up 12 shots in the game's final two periods. Maybe they were just saving themselves for tonight's game in Atlanta.

But enough with my inherent negativity. This was a big win in an intra-division game to put the Caps above .500 for the first time since... well, I don't know when, but I'm sure someone will tell me. The team is also 2-0-1 at home, Richard Zednik showed signs of life (in fact the second line continues to score, racking up a pair of goals and three assists), and Kris Beech won 57% of his faceoffs, a category in which he's now 3rd in the League - who knew?

Finally, I would never claim credit for anything the Caps do production-wise, but it was nice to hear Muse's "Hysteria" as the warm-up music for the second period. Now if we can just bring the rest of the in-game music into the late 20th/early 21st century, we'd really be cookin' with gas. Step one: throw the organ/keyboard/synthesizer in the Potomac. Step two: do some file-swapping with the dude who does the music in Minnesota. Step three: rock. 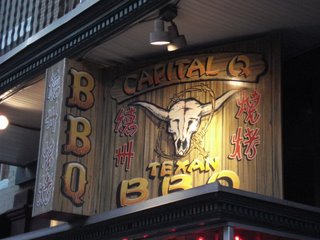 A pint of Smithwicks at Fado and Capital Q's brisket and sausage plate before the game. Honestly, there's nothing better, so a little free advertising for Da Q. I love you guys. Seriously. 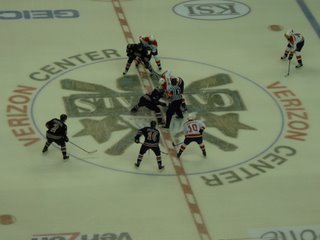 The view from Section 433. It was my first time in the section (usually I don't sit up there among the unwashed masses, but tonight I was a man of the people - all 8,000 or so).