Is It April Already?

Share All sharing options for: Is It April Already? 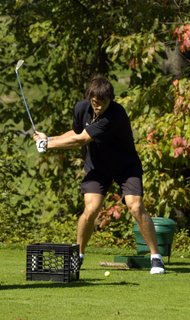 I kid because I love. The pic above is a shot of Alex Ovechkin's ugly golf swing (and golf outfit - we wear pants at this level, son) taken at today's Caps Care But Apparently Not About Jews Classic. What's that you say? That ugly swing dropped an ace on the fourth? Did he later walk across the water at the 12th? Lead his people through the sand trap at the 17th for 40 years?

"This was my first time playing golf," Ovechkin said. "I guess it's easy. Maybe it would be better if I played golf, not hockey. It was lucky, though. I have to play again now, see how I can do."

J.P., your last three posts have been about AO boxing, playing baseball and golfing (or whatever this post is about). Is this still a hockey blog?

Heck yeah - and it all starts Thursday night. Stay tuned.

Oh, and I'd like to thank Ted Leonsis for the shout-out in the WaPo. Nothing beats waking up to a crippling hangover and your mom calling to tell you you're in the paper. Luckily, it was for a good thing.

UPDATE: In other two-sport star news, much to the chagrin of Canadian Diving Team captain Sidney Crosby (that is why he's called the Greg Louganis of the North, no?) the NHL says it's cracking down on diving and embellishing.

UPDATE: Here's some video of AO's day on the links: