Whenever I get the chance to, I like to rip off the guys over at The Battle of Alberta. Here, then, is my initial stab at a 2006-07 Caps organizational depth chart... sort of. I say "sort of" because it doesn't necessarily rank the players at each position, but predicts line combinations. I also say "sort of" because it includes players who aren't yet signed, but who I expect to be signed before the season starts (noted by asterisks). This chart will be updated here, so check back often. 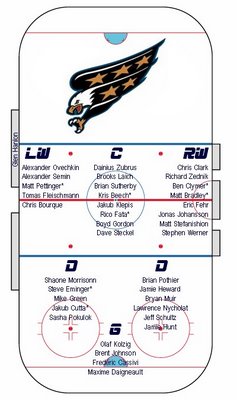