After drafting Ellicott City's own Luke Lynes in the fourth round of last month's NHL Entry Draft, the Caps found themselves with three native Marylanders in the system (captain Jeff Halpern and prospect Stephen Werner being the others), which is alright if you're a lacrosse team, but not so good if you're a hockey team. Something had to give, and today it did as Halpern signed with the Dallas Stars, returning the Caps to a more manageable two skaters from the greatest state in the land.

As for the Halpern deal (said to be for four years at around $2 million per year), I'll likely have more to say on it at some point, but I agree with GMGM's assessment that "[i]t's hard [for Halpern] to turn that kind of deal down." Um, yeah. I'd have liked to have seen Halpern back for a one- or two-year deal at maybe $1.5 million, but sinking $8 million into Jeff Halpern for the next four years is way too much, as Dallas will likely find out. I wish him all the best in Big D, though, and hope his storybook NHL career has plenty of great chapters left in it. Chapters like this one: 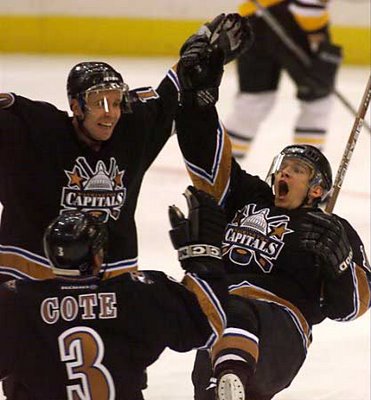