Backstrom To Stay In Sweden

Share All sharing options for: Backstrom To Stay In Sweden

At least I'm told that's what this means: 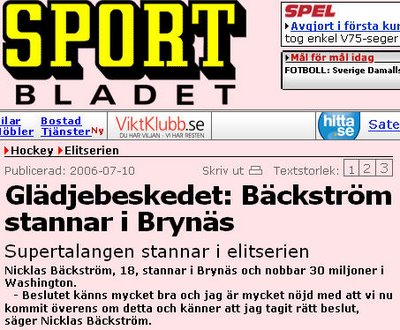 ... and running the webpage through a free online translator tells us all we need to know:

My initial reaction was one of disappointment. I guess I would have liked to have seen Slick Nick display the same burning desire to conquer the North American game at the earliest possible date that Alex Ovechkin displayed from the word go last year. But Backstrom, the fourth overall pick in last month's Entry Draft (and by most accounts the most NHL-ready), is not Ovechkin, and hopefully another year of development in Europe as a big fish in a smaller pond will be best for him - and more importantly the Caps - in the long run. And don't forget that, due to the lockout, Ovechkin had a year of hockey in perhaps the most competitive professional league in the world (that was playing hockey) after being drafted before making his NHL debut last October. In essence, Backstrom will be doing the same. So after sitting on it for a few minutes, I'm fine with the decision and will anxiously await his North American debut.

Besides, can you blame a guy for not wanting to leave this?

The team learned Monday that center Nicklas Backstrom, the team’s top choice (fourth overall) in last month’s 2006 NHL Entry Draft in Vancouver, will not come to North America for the 2006-07 season. Backstrom has opted to remain in his native Sweden and play another season for Brynas of the Swedish Elite League.

UPDATE: And here's even more for those of you who can read Swede.

UPDATE: The WaPo's got a story on Backstrom's decision here, the WTimes here.

[Hat tip to CapitalGoodie for the pointer]