Ovechkin Named To All-Tournament Team, Potentially Banned From Participating In Next Year's Tourney

Share All sharing options for: Ovechkin Named To All-Tournament Team, Potentially Banned From Participating In Next Year's Tourney

Alexander Ovechkin was named to the World Championships tournament all-star team, but it may be his last international competition for a long time. Obviously Caps fans are hopeful that Ovechkin will still be playing NHL hockey this late in the spring in years to come, but even if that pipe dream doesn't play out, Ovechkin and his Russian comrades in the NHL may be banned from participating in next year's World Championships in Moscow.

There is a danger that if we do not find [a new international transfer] agreement with (NHL commissioner) Gary Bettman, Russian players will not be allowed to play in Russia next year.

Read more about the potential controversy here (including an unsatisfactory answer as to why Alex was allowed to play in this year's tournament).

Should Russian NHLers be prevented from playing when their homeland hosts the Worlds next year, there will be plenty of disappointed fans and players, not the least heart-broken of whom will be Muscovite Ovechkin, seen below being consoled by Russian teammate Evgeni Malkin. For the good of hockey, lets hope something gets done... after it's too late for Malkin to come over and play for the Penguins in 2006-07, of course. 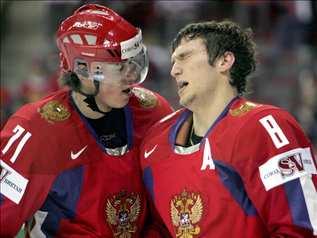