When your favorite team was eliminated from contention in November, you watch the playoffs a little differently. You no longer fret as incessantly over how bad your team's sixth (or fifth, or fourth...) defenseman is. You don't obsess about offensive zone faceoffs or powerplay dump-ins. You simply want some entertaining hockey and maybe a few embarassing playoff performances to lighten your mood. And for the fan whose team has played more golf in the past month than Phil Mickelson, nothing can sour your hockey viewing experience like the same horrible commercial running at nearly every single commercial break.

Caps fans know what I'm talking about from the local Comcast coverage of Caps games. Mention catch phrases like "The chances I'll be working... are remote" or "I'll have the roast duck with the mango salsa" to most of Washington's hockey faithful and you'll see their expression turn to that of someone who just had one tequila shot too many and is getting ready to Spe on the band.

Now, I know that beggars can't be choosers and the NHL isn't exactly rolling in sponsorship offers. Still, the frequency with which OLN plays the car ad screen cap'd below - coupled with its all-around awfulness - deserves some form of outrage and ridicule, so I must ask: which should I associate more closely with fairies, OLN, the NHL or the car company? 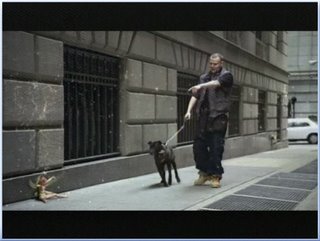