He Writes The Songs That Make The Whole World Sing?

Share All sharing options for: He Writes The Songs That Make The Whole World Sing?

Scanning this morning's hockey news (apparently the playoffs aren't quite done yet, fyi), I came across an interesting quote from Coyotes general manager Michael Barnett regarding the 'Yotes re-signing 39-year-old Curtis Joseph to a one-year deal:

[Joseph] continues to write new records while playing at his customary high level.

Now, I was prepared to let the whole "while playing at his customary high level" part slide, despite CuJo posting his highest goals against average and worst save percentage in nearly a decade last season - the Desert Dogs were fairly atrocious, scoring was up, etc. But I had to throw a flag on the "He continues to write new records" assertion. And then I stumbled upon this: 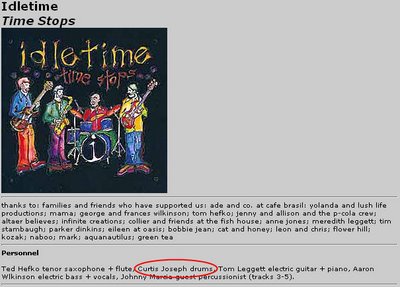 Sure enough, CuJo is credited with co-writing Track 6, Afghanistan. Now, in fairness to me, this record that Joseph wrote was released back in 1999 and I've seen no evidence that he "continues to write records," but I'll apologize to Mr. Barnett... because I know he couldn't have been talking about any NHL goaltending records... since CuJo has none.