According to Tennessean.com, defenseman Brendan Witt has been suspended by the NHL one game for kneeing Columbus forward David Vyborny (cap tip to Kukla's).

Despite already topping his career high in points with 55, "David Vyborny" is still far from a household name, and nowhere is this more evident than in The Tennessean's article in which they spell Vyborny's name a mind-numbing four different ways in just five paragraphs (click to enlarge image): 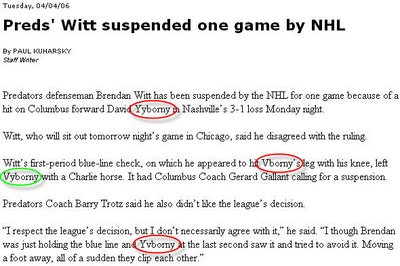 Oh, and Mr. Kornheiser: it seems that a borderline-literate reporter for "Middle Tennessee's #1 Online News Source" knows the coach of the Columbus Blue Jackets' name. That's another five bucks you owe.