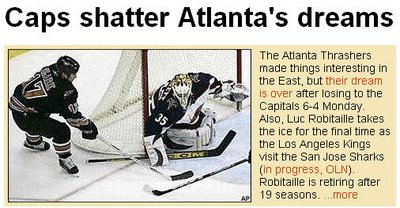 The above screen cap from NHL.com just about says it all... but that won't stop me from babbling on for a while. In an absolute must-win for the Thrashers - against a team they pounded by a combined score of 15-4 on back-to-back nights back in October who, on paper, had nothing to play for - Atlanta couldn't hold a third period lead and, as a result, will have to wait at least one more year to make the first playoff appearance in team history. The Thrashers got horrendous goaltending (and changed goalies not once but twice, hoping in vain that either Mike Dunham or Michael Garnett could make a big save), got no production whatsoever from its highly-ranked power-play (which was 0-for-8) or any of its trio of 90-point forwards and were doubled-up in hits (29-15). If that's how gutless Bob Hartley and his crew perform in a critical regular season game, the Thrashers should thank the Caps for saving them from the embarassment they would have surely suffered in the postseason.

The host Capitals, on the other hand, played like it was their collective life on the line (beginning at the twelve-second mark of the first period and ignoring the entire horrid second period). The Caps were everything the Thrashers were not last night, spurred on by an announced attendance of 16,891 that was reminiscent of some of the crowds of late-Aprils past. In their last home game of 2005-06, the Caps hit hard and played hard (again, ignoring the second period), got great penalty-killing, big saves from Olie Kolzig and clutch goals in the third period to rally from a 4-3 deficit to win 6-4. And, in perhaps the ultimate contrast to the way the Thrashers have played all season long, with a two-goal lead, Atlanta's goalie pulled and more than two minutes left in the game, Caps' coach Glen Hanlon kept his superstar on the bench, not needing to run up the score and embarass his opponent (though it is admittedly more likely that Hanlon was just protecting his most valuable asset, knowing how the Thrashers often don't deal with disappointment very well).

In all, it was a treat for the home crowd to witness a game that in many ways symbolic of the 2005-06 Caps' team: hard-working, exciting, well-coached and full of glimpses of a potentially spectacular future. Oh, and the Asian gentleman dancing during "The Hockey Song" absolutely ruled.

Now it's off to Tampa to put a wrap on the season. By knocking off Atlanta last night (thus clinching a playoff spot for the Lightning), the Caps have made tonight's game a little less meaningful for their hosts. In fact, the Lightning would likely be better off losing tonight and guaranteeing an eighth-place Conference finish and a date with Carolina (assuming a Carolina win at home tonight or an Ottawa loss on the road or an overtime loss for both teams) in the first round of the playoffs, a team they were 5-2-1 against in the regular season. So roll on over, Tampa. Rest your #1 goalie (nevermind - you let him go via free agency last summer). Let Alex Ovechkin pass Mike Bossy for second all-time on the rookie goal-scoring list and catch Peter Stastny for second all-time on the rookie point-scoring list. We scratched your back last night - scratch ours tonight.

Speaking of Ovechkin, in the interest of full ridicule, check out these pics, some of which appear to be from some AO modeling gigs. Yikes (and cap tip to CP for the link). In more hockey-related Ovechkin news, newsflash: he's really good.

Finally today, kudos to Mike Green for being named AHL Player of the Week. See you soon, Mikey.

Thread of the Day: The Beauty Of Crosby's Late Push...

Elsewhere 'Round the Rinks:
Daily Awards