[R]eputations are made in the playoffs. And coming into this season, Turco was just 7-10 with one series victory, despite playing behind teams that were among the best in hockey.... Turco always seems to wind up on the losing end while some other, seemingly inferior netminder... finds a way to help his team get to four wins first.... His job's probably safe -- for now, anyway. But his reputation, and the Stars' season, may be sealed.

With a loss last night, Turco is now 7-13 in his playoff career with a Goals Against Average above 2.60 and a Save Percentage on the wrong side of .890. Perhaps, standing on the brink of elimination, coach Dave Tippett should give Johan Hedberg the nod in Game 4. Hedberg is the anti-Turco, playing to a GAA more than a half a point better in the playoffs versus his regular season numbers with a similarly-heightened save percentage (Caps fans will remember his impressive handling of Washington in the 2001 playoffs). But that's Tippett's call, and I certainly don't follow the Stars closely enough to make any judgment of Hedberg's play of late.

What I do follow closely, however, are numbers and sometimes the numbers tell an interesting story. Sometimes they can tell you who steps it up in the clutch and who is a real dog come playoff time. The following stats, then, may offer some insights. Caveat: with the unusually high number of goalies making their playoff debuts this year (denoted by an asterisk) and other relatively inexperienced goalies getting big playoff minutes (Martin Gerber had 20 minutes of playoff experience before this year, John Grahame had played in two playoff games, Manny Legace had played in five, Kevin Weekes in eight), these numbers should be taken with a shaker of salt. Nevertheless, here they are - the career regular season and playoff goals against averages and save percentages of the 2006 NHL Playoff netminders, ranked by the differences between regular- and post-season numbers (click on the tables to enlarge): 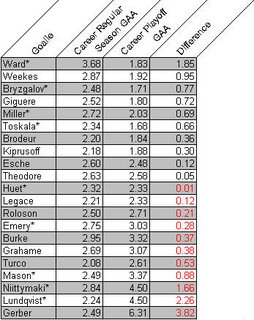 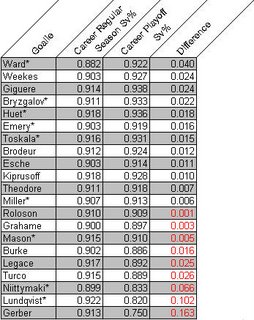 So what do these numbers tell us that we didn't already know? Well, for one, Robert Esche has been a better playoff goalie than he's gotten credit for, despite the stinker he put up in Game 2 of the current series with Buffalo, and games 1 and 3 have certainly borne that out. Kevin Weekes' numbers also surprised me, though with his limited minutes, he's one bad game away from dropping significantly down both lists.

Otherwise, the stats are largely what you'd expect - a couple of goalies with limited experience and one great playoff run under their respective belts are towards the top of both lists and Martin Brodeur is Mr. Spring - which brings us full circle. Most of these stats are "what you'd expect" because, as Muir wrote, "reputations are made in the playoffs." For more than half of the goalies in this year's playoffs, there is still plenty of time to craft a reputation as a big-time playoff performer. For others, like Marty Turco, that window is about to slam shut.