Share All sharing options for: Media Matters For Canada

You all know about the alleged left-wing media bias in the U.S., but did you know that the mainstream Canadian media has an anti-left-wing bias? It's true! The left-wing in question is Alex Ovechkin, whose stats in TSN.ca's Rookie Watch haven't been updated to reflect the two points he racked up on Saturday night. Perhaps the staff is just a little slow to update their website, especially coming off a weekend, right? Then why are Sidney Crosby's stats updated through his game of Sunday night? Conspiracy, I tells ya! 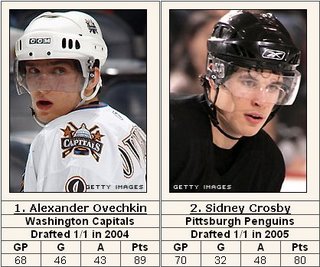