Rookie Of The Month? That's It?

Share All sharing options for: Rookie Of The Month? That's It? 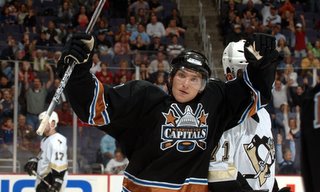 As mentioned earlier, Alexander Ovechkin was bestowed with the honor of being named the NHL's Rookie of the Month for December. But did he possibly deserve more than that? Currently the NHL's reigning Offensive Player of the Week as well, Ovechkin arguably had a better December than Jaromir Jagr, the man who won the award as the NHL's Offensive Player of the Month for December. Let's take a look at the numbers for last month:

There are other stats - such as hits (in which Ovey leads Jagr 77-9 for the season), giveaways (Jagr has 56, compared to Ovey's 37) or shorthanded ice time per game (Ovey gets just under 1:00, Jagr just under 20 seconds) - that weigh heavily in Ovechkin's favor as well, but they aren't readily accessible broken down by month.

In other words, even having played in one less game than the five-time Art Ross Trophy-winning Czech, Ovechkin's numbers were arguably better in December. And if you give Alex another game (take the last game in November against Buffalo in which he had one power play helper, or the Atlanta game on New Year's Day in which he had a goal, a power play assist, five shots on goal and was +1) so that the two wingers played the same number of games, the young Russian's numbers are even more impressive.

Now, I'm not saying that Ovechkin deserved December's Player of the Month honors, but he sure wasn't far from it. The greater point is that it's really time for the rest of the hockey world to stop talking about Alexander Ovechkin as one of the best rookies in the League and to start talking about him as one of the best players in the League. Period. His current accolades should have him well on his way towards that recognition, but just for fun, let's look at some more numbers and comparisons. Through January 8:
The bottom line is that with all these numbers, nearly one-quarter of his team's goals (the highest percentage in the NHL) and a hand in 45 percent of his team's offense (second in the League), perhaps we should shift our focus from the Calder Trophy to something bigger.