Share All sharing options for: The Ultimate Hockey Roadtrip

Recently Odd Man Rush linked to an article in a small Maine newspaper (Maine's oldest paper, in fact) about a couple of friends and their ambitious hockey vacation:

I studied the NHL schedule and a road map and discovered it would be fairly easy to hit several NHL cities in a week. I informed my friend, Josh, an equally demented pucks fan, of my plan and he was quickly on board. The plan was to go to games in Montreal, Ottawa, Toronto and Detroit. The trip would allow us to see three Original 6 teams (the Montreal Canadiens, the Toronto Maple Leafs and the Detroit Red Wings) in three hockey-crazed cities, and possibly the NHL's best all-around squad in the Ottawa Senators, who also happened to have one my favorite all-time players, 40-year-old Dominik Hasek, in goal. Since the trip would take us through Toronto, we'd also be able to hit the Hockey Hall of Fame. It was the ultimate pucks pilgrimage.

Best of all, we'd be free to act like little boys again.

"Three cities in a week?" I thought. "Amateurs." Now, I'm not about to claim that I invented the hockey road trip. I may, however, have perfected it. And with my father and brother, we had just about the best family vacation imaginable. What follows, then, is the timeline of an incredible week of hockey, male bonding and more hockey.

My brother Rich (Pooh, to Rink regulars) lives in Los Angeles. At this time he was an employee of the L.A. Kings and free club-level tickets to the Kings/Canadiens game were well worth the price of sleeping on the floor in Pooh's apartment (dad got the pull-out couch). The game featured a 46-save performance by then-Hab goalie Mathieu Garon (maybe that's why the Kings traded for him) and a two-goal, one-assist performance by personal favorite Richard Zednik, so despite a home team loss, the on-ice product was enjoyable. The highlight of the game, however, was that our seats were in the players' section, and we sat one row behind an injured Ziggy Palffy. I don't know why I'm star-struck by hockey players. I can walk right by celebs in other walks of life, but for some reason am in awe of hockey players. Anyway, I got Ziggy's autograph on a puck as he left, and we headed home happy. Well, except for the Kings fan among us.

The first flight of the trip was early the next morning, a 7:00 flight to Vancouver. This was Sunday and one of the only non-game days, so we rested up, saw some of Vancouver in the rain and generally relaxed. We had no idea what would await us the next day.

Otters. Really cute otters. Good lord, these things were- sorry. I'm back on track now. After spending the better part of the day sight seeing (including the Vancouver Aquarium) in what really is an exceptionally beautiful city, the three of us headed to GM Place for that evening's game between the host Canucks and the visiting Avalanche. 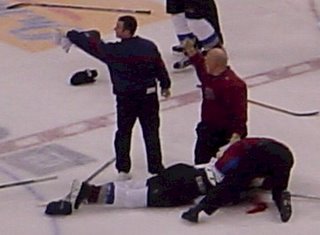 There was a lot on the line - first place in an ultra-tough division and, for a small handful of cro-mags, revenge for a marginal hit that Avs' grinder Steve Moore had laid on Canucks captain Markus Naslund two weeks earlier. I don't need to detail the events leading up to the game, nor really do I have to detail what happened during the game (which wasn't really much of a game at all, though Trevor Linden did become the Canucks' all-time leading scorer with his two assists). But I remember clear as a bell turning to my father about mid-way through the third period as Todd Bertuzzi and Moore were both on the ice and saying, "Watch Bertuzzi - he's trying to get Moore to go." So we watched Bertuzzi chase Moore and finally, well, you know what he did.

After the dust cleared slightly and Steve Moore lay there on the ice, I swear I thought he was dead. It was a very similar feeling I got watching the Jiri Fischer incident on television a couple of weeks ago. Absolutely mortifying (and I wonder why the Wings game was postponed at that point but they finished the Avs/Canucks match). We spent the rest of the night in bars, talking to the locals and trying to gather any information about what we'd seen. The fact that Moore was alive was good news at that point. The fact that I was well into the wobbly pops and we had another early flight the next morning was not.

I guess this is as good a time as any to mention that my brother doesn't fly well. At all. Think about how you'd feel if the pilot came over the loudspeaker and said, "Folks, I'm afraid I have some bad news. It seems our engines have petered out, our landing gear is kaput and that twelve-pack of Pabst I had before the flight are finally catching up to me. We do realize you have a choice in airlines and we thank you for choosing us." Ding. You are now free to crap in your pants. That is how I imagine Pooh feels on even the smoothest of flights. So when we en 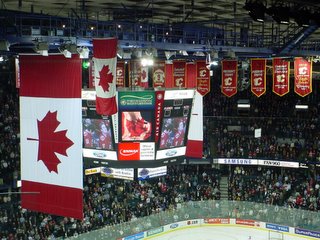 countered a little turbulence as we crossed over the Canadian Rockies, he was a wreck. Poor kid. Needless to say, we made it.

After a whirlwind tour of Calgary (the Tower -which was swaying in the wind, the Zoo, the cowboy stores, etc.) it was off to the Saddledome to take in one of the great rivalries in sports - the Oilers and Flames. We had the Bob Uecker seats in a building that is reminscent of the old Capital Centre out in Landover. In other words, dark, dingy and rockin'. The game didn't disappoint either, with Jussi Markkanen and Miikka Kiprusoff standing on their heads and settling for a 1-1 tie. On a side note, I think I got a tan from the pyrotechnics following the Flames' goal. I'm shocked it didn't melt the ice. Then again, if the ice girls couldn't nothing would (ed. note: upon further review, the girls are awful looking. Hey, I told you we had bad seats).

The next morning we awoke, hopped in the rental car and headed to Tim Horton's. 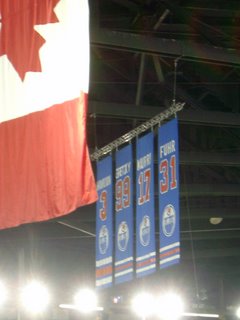 How is it that they have Tim Horton's and we're the nation of fatties? I probably had enough maple dip donuts in four days to give a moose a heart attack. But I digress. We finished Glutton Bowl IV and headed north, arriving in Edmonton early in the afternoon. We only had a few hours in which to see the town, which proved to be enough time. By a few hours.

A subway ride and a scalper later, we were inside Rexall Place (where we'd been greeted by a statute of Wayne Gretzky hoisting the Cup outside and multiple Stanley Cup Champion banners inside) to see the Avs again. Steve Moore was a scratch. The game was a good one - the Avs won in overtime on an Adam Foote goal - and our time in Canada was drawing to a close. But not before I watched my 140-pound brother put away more food at a Boston Pizza than I thought humanly possible. It was a little bit revolting, but oh so manly. Which was what this trip was about, right?

Here's where things went from a little crazy to full-blown mania, as we had a 6:30 AM flight the next day out of Edmonton. With a brief stop in Denver (why didn't we take the Avs' charter?), we arrived back in Los Angeles by noon. Was our trip done? Hardly.

The most harrowing leg of the planes, trains and automobiles trip may have been the drive from Los Angeles to Anaheim during a Friday rush hour. Lord. We finally made it to the Pond for that night's game between the Isles and Ducks, easily the least entertaining game of the trip, though Rick DiPietro's 45-save performance is certainly noteworthy, as were not one but two fights involving Duck tough Garett Burnett. Also noteworthy was the arena itself. It was easily the most family-oriented and cleanest building I've ever been in (including hospitals). And the hallways literally have marble floors. I guess I should have expected that combining Disney and the O.C. would result in such a non-hockey friendly environment, but it was still a shock to the system.

The next morning we caught a flight out of LAX up to San Jose for the last game of our trip, an afternoon tilt between the Kings and Sharks. Nice arena. Decent game. Great giveaway (an HP laptop is given away during every game). But I could sense a bit of burnout in the three of us. Too much travel? Too much hockey? Too much of each other? Maybe a little of each, but honestly, if anyone had wanted to hop a flight to Denver for the next day's Coyotes/Avs game, I'd have done it in a second.

After the game we had a nice dinner and toasted our trip. Six games in six cities in eight nights. A couple of weeks later, I took a mini trip by myself to see games in Columbus and Pittsburgh (I had a wedding to attend in Columbus and Pittsburgh was on the drive home... sort of), but it wasn't the same. You see, what made the trip special wasn't the hockey. It was the time spent with my father and brother. Alright, who am I kidding? It was about the hockey. And it was almost enough to carry me through the entire lockout. Almost.

That, my friends, was the ultimate hockey roadtrip.