Tonight Darcy Tucker (pictured) and the Leafs blow into Washington for the first game of a home-and-home series that will conclude Tuesday night in Toronto. 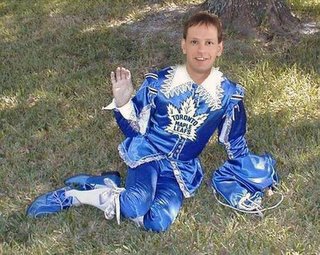 It'll be interesting to see what kind of crowd the Caps get, as the League did them no favors in scheduling an evening home game the same night that the Redskins are playing just a few miles away. I'm setting the over-under at 11,500 paid attendance. Any takers?

Today's WaPo has a nice article on the decade-long friendship, rivalry and intertwined career paths of Caps rookies Tomas Fleischmann and Jakub Klepis. George Solomon also has a column on the Caps and their fans (or lack thereof) in today's Post. The WTimes laments the Caps injury woes. Finally, yesterday's Globe and Mail has a sports section cover story on "The Ovechkin Effect."

Daily Awards
A tip of the cap to Dunzy for the pic.