If It's Contempt You Want, You've Got It

Share All sharing options for: If It's Contempt You Want, You've Got It

One of the "new" NHL's major initiatives is the League's scheduling emphasis on intra-divisional rivalries. Teams now play each of the teams within their division eight times per season, each out-of-division/in-conference team four times and each of the teams in two of the other conference's three divisions once. Familiarity breeds contempt, the saying goes, but in this case, the contempt bred may very well be that of the fans towards the NHL scheduling powers that be.

Sure, there will be plenty of great Edmonton/Calgary battles. But while Oilers fans are sitting through eight meetings with the Minnesota Wild, they'll have to wait until next year to see Capitals rookie Alexander Ovechkin and even then it may only be on television. The Senators and Leafs have thrilled fans twice already this year, but by the seventh or eighth time Ottawa is facing off against Buffalo, won't the fans be wishing they had a chance to see if their team could handle Rick Nash (don't despair, Sens fans - you'll get a visit from Tyson Nash in January). Sorry San Jose, Anaheim, Phoenix, Dallas and L.A. - no Sidney Crosby for you this year.

The real reason for the new schedule is, of course, money. The 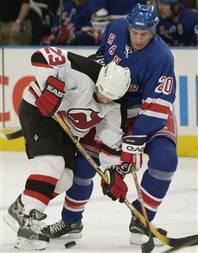 owners want to pay as little in travel expenses as possible. The Rangers have fairly intense rivalries going with the Devils, Islanders and Flyers, but it doesn't hurt that all three arenas are located within 100 miles of Madison Square Garden. Thirty-percent of Rangers road games, then, are a bus trip away and the team only leaves the eastern time zone twice - not a bad way to cut costs.

As the League contorts itself in an effort to make it all work, scheduling anomalies abound. For example, in one stretch from March 25 through April 7, the Capitals will play Carolina five times over the course of seven games, including back-to-back road games with three off-days in between. Maybe by then the 'Canes will be fighting for home-ice advantage in the playoffs and the Caps will be jockeying for position in the Phil Kessel sweepstakes, but regardless of what's on the line, it will be an awfully hard ticket to sell.

Aside from the scheduling glitches, the new format will have a real impact in the standings as well (we can call this the 2005 Houston Astros/NL East Effect). While Buffalo fights for a playoff spot playing the likes of Ottawa, Boston, Toronto and Montreal, Florida (a team of arguably similar overall talent) will be playing Tampa, Atlanta, Carolina and Washington. Who has the easier road to the postseason? Teams in better divisions will be beating each other up while teams with weaker division foes will pick up easy standings points, all while fighting for the same playoff spots.

The NHL knows better. They know that great rivalries are not born of teams playing each other 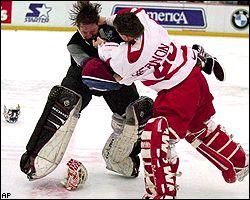 over and over again during the regular season. Great rivalries are the product of (usually multiple) playoff battles. Bruins-Habs, Wings-Avs, Sens-Leafs and on down the line are great rivalries because of playoff histories, not because of Tuesday night games in February.

The new format is particularly difficult for the Capitals, who were already disadvantaged when they were re-aligned out of a division with their traditional Patrick Division rivals and into NHL's NASCAR division. Years of built-up hatred for the Rangers (remember John Druce's run in 1990?), Islanders (Pat LaFontaine's goal at 8:47 of the fourth overtime in Game 7 of the 1987 Patrick Division Finals), Flyers (Dale Hunter's OT goal in Game 7 of the 1988 Patrick Division Semis) and Penguins (I refuse to recount this one) have been replaced by eight games a year with a team from Miami. It's no wonder the team has trouble selling tickets.

How would this have played out in 2003-04? Based on the standings (a very rough approximation given that the teams didn't play this proposed schedule), the Eastern Conference first round series would have been Boston-Philly, Toronto-Ottawa, Tampa-Atlanta and New Jersey-New York Islanders. In the Western Conference it would have been Detroit-St. Louis, Colorado-Dallas, San Jose-Edmonton and Vancouver-Calgary. Sorry Montreal and Nashville - you don't get to cruise into the playoffs solely because other divisions may be weak (which, of course, has the added bonus of making the more prevalent intra-divisional regular season games more important. See how it all comes together?).

The beauty of this is that teams will be playing each other in meaningful playoff series over the year, just like in the good ol' Norris/Adams/Smythe/Patrick division days. That's how rivalries are formed. As it stands now, the likelihood of actually playing a rival in the playoffs is greatly reduced. The Lightning and Flames - 2003-04's finalists - played four playoff series each, but only one of those was against a division rival (Calgary's first round matchup with Vancouver). Tampa, for example, played the Islanders in the first round and may very well never play them again in the playoffs under the current format. 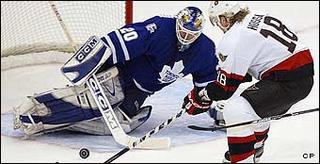 rivalries because frankly there isn't enough on the line during the regular season. Ottawa can beat Toronto in all eight regular season games this year, but fans of both teams know that the only bragging rights in this rivalry for the time being belong to the Leafs who have bounced the Sens from the playoffs in four of the past five years. Add in the fact that the current format denies hockey fans in each city the chance to see a full 1/6 of the League's players, and the new division-heavy schedule looks more and more unattractive by the day, all to save a few shekels.
Familiarity breeds contempt alright - just the kind of contempt the "new" NHL doesn't need.