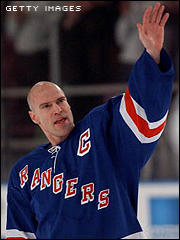 More old people clearing the way for youth to rule the new NHL: Mark Messier and Trent Klatt hang 'em up. I like to hate on Messier but will save it for another day as his undeniably impressive NHL career has (finally) come to an end. As for Klatt, his retirement is noteworthy if only because he's been the most vocal critic of how NHLPA Executive Director Ted Saskin was elected, an issue of major contention within the players' union these days....

All indications are that the Peter Bondra saga will finally come to an end today when he is announced as the newest Atlanta Thrasher [Atlanta Journal Constitution]....

Some key RFA signings from yesterday: Jay Bouwmeester in Florida, Michael Ryder in Montreal and Mark Parrish on the Island.