Forwards: In each of the past three NHL seasons the Leafs have been in the top eight in the NHL in goals scored, finishing fourth in 2003-04 with 242 goals. Well over 100 of those goals, however, won't be wearing blue this year, as some left via free agency (Alexander Mogilny), some retired (Ron Francis), some were retired (Owen Nolan), some left to ease into retirement in sunny Miami (Joe Nieuwendyk and Gary Roberts), and some left for parts unkown (Mikael Renberg, Robert Reichel). Their primary replacements are three reclamation projects - Jeff O'Neill, Eric Lindros and Jason Allison. O'Neill's goal and point totals have gone down each year since a career high 41 goals and 67 points in 2000-01 to an embarassing 14 goals and 34 points in 2003-04. The power-forward is not nearly as bad as his 2003-04, and a new start should do him well. Even if he doesn't regain his 40-goal touch, at $1.5 million, O'Neill is a low risk/high reward gamble for Leafs management. Similarly, Lindros's numbers have gone down in each of the last three seasons from 73 (in 72 games) in 2001-02 to just 32 (in 39 games) in 2003-04. But, at $1.55 million, he is a relatively safe investment. The third musketeer, Allison, has played at about a 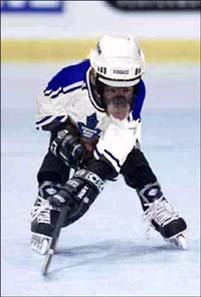 point-per-game since leaving Washington in 1997 (go figure), but has only played 26 games since the end of the 2001-02 season due to neck and concussion problems. Like Lindros, if he can stay healthy (an enormous "if"), he'll be another great payoff for the Leafs, who will only pay him $1.5 million in salary this year. Of course, the likelihood of all three staying healthy is remote. So who else will help out workhorse center and all around (regular season) stud Mats Sundin? Toronto brought in the enigmatic (euphemism for selfish) Mariusz Czerkawski to provide some scoring punch, and will expect another 20-goal year from cheapshot artist Darcy Tucker (pictured). In addition, rumor-mill posterboy Nik Antropov and fellow tall Russian Alexei Ponikarovsky will frustrate Leafs fans waiting for their breakout years, and the current "next big thing" in TO is ready to get a first taste of NHL action in the person of Alexander Steen. Matt Stajan, Tie Domi and Chad Kilger will all also kick in a few goals every now and again, and Kyle Wellwood, who finished fourth in the AHL in scoring last year, should also see some time with the big club. The Leafs have lost a lot up front, but with limited cap room have taken some risks from which they could reap huge rewards. More likely, however, the Toronto offense will fall out of the League's top 10 in scoring for the first time in years. 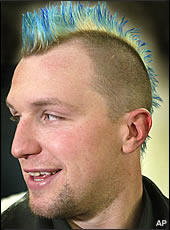 against the Flyers in Game 5 of the Eastern Conference semis in 2003-04? Not so much. And the fact that he played ten games in Sweden in 2004-05 before being sent home for being fat and lazy? Not so much there either. OK, maybe love is too strong a word. But a rearguard who can finish second among defensemen in goals and fourth in points while finishing a plus-22 and racking up 86 PIMs? That's a thing of beauty. But 2003-04 was only the second time McCabe had broken the 30-point barrier, his best single-season plus/minus and the fewest PIMs he's had in a season of professional hockey. Expect McCabe to come back to earth a bit in 2005-06, especially on a weaker Maple Leaf team. BMac's partner will again be Tomas Kaberle, a Jekyll & Hyde blueliner who seemed poised to join the game's elite offensive defensemen after a 47-point 2002-03 season (his fourth 39+ point campaign in a row) before hitting the skids and only posting 31 points in 2003-04. Still, Kaberle's plus-36 rating and 78 points over his last two NHL seasons speaks to his talent, and he should return to form for 2005-06. Toronto's defense will be filled out by serviceable blueliners Alexander Khavanov, Ken Klee, Aki Berg and Brad Brown, none of whom is anything special. A darkhorse is Carlo Colaiacovo, who is running out of time to show that he's got a career as an NHL defenseman in front of him.

Goaltenders: Ed Belfour is 40-years-old, he's got a wonky back, he's a shadow of his former self - you've heard it all before, and so has he. But despite all of the ramblings of pundits, Belfour hasn't played fewer than 59 games in a season since 1996-97, and, with the exception of 2001-02, has posted at least 32 wins in every year over that stretch, with goals against averages below 2.27 and save percentages of better than .914 in every year but 2000-01 (in which he had a 2.34 GAA and a .905 SV%). Oh, and he needs just 12 wins to pass Terry Sawchuk for second all-time (he's currently tied with Jacques Plante - impressive company, no?). Belfour had a massive meltdown at the end of the Philly series in he 2003-04 playoffs, highlighted by the touchdown he gave up in Game 5 (he left the extra point conversion to Trevor Kidd), but that was a team effort. The Leafs will need Belfour to be at his best this year, and that's asking a lot of a 40-year-old with a wonky back, but our bet is that somehow The Eagle will find a way to silence the critics yet again. Mikael Tellqvist will serve as Belfour's understudy, and the Leafs hope that he can play well enough to keep Belfour fresh for a spring playoff run.

Bottom line: For the first time in a while, the Leafs aren't one of the Eastern Conference preseason favorites, and deservedly so. Maybe that will serve them well, though it's unlikely that any pressure to win has subsided in Toronto. This team has too many questions surrounding it to count, but with a little luck and some magic in goal, the Leafs could give the Senators and the Bruins headaches in the Northeast division. Odds are better, however, that they'll be fighting for a playoff spot down to the wire.

OK, Leaf lovers. Let me have it.