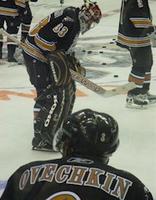 As Ben Folds wrote, "what fun, I can't wait 'til the future gets here." Unfortunately for Caps fans, the future may be a while. Last night, in front of approximately 4,500 at the MCI Center, the Capitals fell to 0-3 in the preseason, dropping a game that probably wasn't as close as the score, 4-0 to Buffalo.

Alexander Ovechkin, making his NHL debut, was noticeably nervous and a non-factor for most of the game with the exception of a jaw-dropping move he made with about six minutes left in the third period. Ovechkin later scored on a pretty (and seemingly effortless) backhander in the shootout (the entire shootout can be viewed here).

Olie Kolzig kept the Caps in the game early, and could only really be faulted for the fourth Buffalo goal. He finished the night with 23 saves. Kolzig's counterpart, Ryan Miller, saved all 29 shots he faced, though no more than two or three at most were particularly difficult chances. Other notable performances were turned in by Sabres rookie Tomas Vanek, who potted another two goals, and Capitals wings BabyRay Bourque, who is a Tasmanian Devil of energy 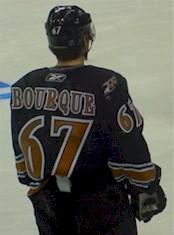 (though he had a bad turnover at the point on an early power play), and Chris Clark, who threw with Buffalo thug Andrew Peters after the latter took Clark into the boards rather unceremoniously. The Caps penalty kill (9-for-10) also looked good, but Ovechkin said it best in his postgame comments: "We not played good."

The WaPo covers the game (or more accurately, the fans at the game) here. The WTimes has it's coverage here and a worthless piece (intrigued you, didn't I?) by Dan Daly here.

Also, the Capitals have announced that all 82 games will be televised, with 52 games on Comcast SportsNet and the rest on WBDC-50 and News Channel 8. This is great news for Caps fans, who have in the past been unable to see all of their team's games.