Ovechkin Update And Work To Be Done

Share All sharing options for: Ovechkin Update And Work To Be Done 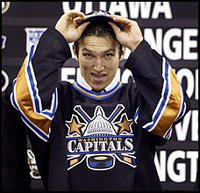 According to today's WaPo, the CBA doesn't need to be finalized before wunderkind Alex Ovechkin can sign with the Caps:

"Ovechkin's agent, Don Meehan, said Thursday his client has until Wednesday to back out of that contract and sign with the Capitals, and that his decision is not contingent on the NHL having a completed collective bargaining agreement by that date. However, Meehan said he would need to know the precise language of the CBA before he would advise Ovechkin to void his Russian deal."

Outside of signing AO, the Caps have plenty of work to do. Only nine players are under contract, and those that aren't include key veterans Jeff "Everything I Know About Hockey I Learned From Playing With Mike Spero" Halpern, Dainius Zubrus and Captain Brendan Witt. Obviously the top priority is Ovechkin. Once that deal gets done, I'll be able to exhale.