Share All sharing options for: Ovechkin Has Chosen... Wisely 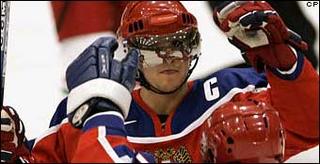 Alexander Ovechkin has exercised his option to void his contract for this season with Omsk of the Russian Super League, meaning that little stands between him and signing with the Caps. It was reported first by TSN.ca here, then soon thereafter on the Caps' official site here, by the WaPo here, and by the WTimes here. My favorite line from the TSN article:

[I]t's difficult to imagine any scenario where the talented forward isn't wearing a Capitals' uniform this season.

Quite simply, this is the most exciting news in Capland since... well, since they traded for Jagr. However, there are several reasons to expect this to turn out better than that did. For one, Alex Ovechkin is not Jaromir Jagr. By backing out of his contract with Omsk, Ovechkin in one fell swoop showed that he a) is not all about the rubles, b) is not worried about being away from home, and c) wants more than anything to prove himself against the best competition in the world. Jagr, on the other hand, cared primarily about money, pouted because when he came to Washington it was the first time he ever lived by himself (seriously - he lived with his mother in Pittsburgh), and he had no motivation because he had already proven himself.

Will Ovechkin sell tickets? It's hard to say. More than anything what will sell tickets is lower prices and a winning team. I'm hopeful for the former in this upcoming year, but not kidding myself as to the latter. Still, the Caps saw about a 1,000 seat bump in attendance in Jagr's first year in DC, then slipped back to just above pre-Jagr levels in 2002-03 and were in the crapper by the time Jagr was shipped out in the Great Fire Sale of '04. And sure, a Russian kid who speaks broken English at best is not nearly as marketable as a guy like Sid Crosby. But people pay to see Ilya Kovalchuk, and they'll pay to see Alex Ovechkin. I will, at least.

On the ice, Ovechkin, generally regarded as the best European prospect in the history of the NHL Draft, gives the Caps a dynamic all-around scorer and physical presence and is most frequently compared to Peter Forsberg, but with more scoring ability. Read the HF Player Profile of him and, if you're a Caps fan, you'll feel it move, guaranteed.

With Ovechkin and Alexander Semin up front and Maxime Ouellet in goal (to say nothing of other solid prospects like 2003 first round pick Eric Fehr, who had a monster year in the WHL this past year, forward Boyd Gordon and defensemen Steve Eminger and Shaone Morrison) and there is a bright future for the Capitals. With the injury-prone Dainius Zubrus centering the two Alexes, you have as exciting a top line as any team in hockey. Add some grit and occassional scoring from young veterans like Jeff Halpern, Brian Sutherby, Matt Pettinger and Brian Willsie and the corps of forwards is, well, serviceable for now. The defense stinks out loud, and it will make Olie Kolzig (or whoever's in net) look worse than he is, but here's the beauty of adding a stud forward like Ovechkin - the Caps can now spend their money shoring up the defense.

My dream scenario before opening night? Re-sign the key free agents, add another veteran forward or two (paging Peter Bondra), then spend the rest of the money under the cap on defensemen and the Caps should be a team that competes for a playoff spot.

Well, I've gotten far off topic, and there's plenty of time to talk about this in the days and weeks ahead. For now, let's just revel in how one kid's decision to come across the ocean has brightened the skies in Washington, hopefully for years to come.